Is Bitcoin the Future?

Reposted from the original on betanews.com 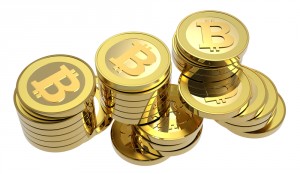 Written by our own Nick Vahalik
There has been a lot of talk lately about Bitcoin, a digital currency that aims to provide the security of cash and is more convenient than a credit card. Just under a year ago, the "cryptocurrency" -- so named for its reliance on cryptography in order to operate -- was traded somewhere between $13–14. However, just one year later, Bitcoin is now trading for over $800, with a peak somewhere in the $1,200 range.
Bitcoin’s rise to popularity has been sparked by its many advantages:

it claims to be inflation-free; have low or zero transaction fees; anonymity for transactions; totally transparent transaction history; irreversible transactions (no chargebacks); protection from fraud; freedom from exchange fees; and does not require the acceptor to be PCI Compliant.

From large organizations to small retailers, sites around the world are looking at this new currency system to implement payments in interesting and novel ways. Many Bitcoin payments support fully mobile checkout. Without any transaction fees, aside from a flat monthly processing fee, micropayments are suddenly much more feasible and useful for companies looking to monetize content. Bitcoin banks are emerging that offer peer-to-peer lending and promise independence from banks.
The advantages are definitely raising eyebrows among entrepreneurs and established businesses alike. Overstock.com announced it was accepting Bitcoin on Jan. 9, and on Jan. 23, TigerDirect began accepting the currency. Upon these announcements, Overstock and TigerDirect were peppered with positive tweets. The Chicago Sun-Times will also be using Bitcoin starting Feb. 1. Bitcoin definitely seems to be en vogue right now and for businesses, accepting it seems to come with little downside. It is yet to be determined if this is purely a marketing ploy or a successful long term business move.
With all the hubbub surrounding Bitcoin, companies are wondering if they should take the plunge and accept it for payments. For many, whether they accept Bitcoin or not makes little difference. In fact, that may even be reason enough to accept Bitcoin. The novelty of accepting Bitcoin can assist in reaching a previously untapped market.

TigerDirect saw substantial spending after accepting Bitcoin -- the company processed roughly half a million dollars in the three days following its acceptance of the currency.

Paying for purchases is just one of the many uses of Bitcoin. Because credit cards charge per transaction fee, accepting payments of five cents to one dollar are unfeasible or impossible. With Bitcoin, it’s possible to bypass transaction fees completely. Accepting even one cent is possible, opening the door for bloggers and independent news sites to charge what they want to monetize their content -- that is, as long as their patrons are willing to pay in Bitcoin.
However, for all of the wonderful things people are saying about Bitcoin, there are still some gray areas that might be discouraging to potential users. Even though it is not currently considered legal tender, tax codes still apply. More interesting than that, the act of creating or "mining" Bitcoin has raised questions about how to tax it and treat it legally.
And while many have lamented the security breaches that have plagued large retailers like Target and Neiman Marcus as of late, numerous articles focus on the security practices of those companies. By contrast, Bitcoin security is completely up to the user. Securing users’ Bitcoin wallet depends on the client they use and how transactions are handled -- banks can’t help since there is no bank connected to the currency. Furthermore, transactions are irreversible. If a user’s security is compromised and their Bitcoin is transferred away, there is no way to recover them.
Most importantly, Bitcoin is bleeding edge and still experimental. The Bitcoin market is highly volatile with daily exchange values varying, sometimes a few dollars, occasionally seeing spikes and dips of much more. While Bitcoin answers many of the problems of traditional online transactions, weaknesses in the Bitcoin system do exist with definite risks. The big question is -- is it worth it?
When looking to try something new, Bitcoin provides some great ways to test new business models that traditional payment systems cannot offer. It offers unparalleled flexibility with its API access and can help reach out to an emerging market of Bitcoin supporters who want the new digital currency to succeed and thrive. If users are ready to hearken back to the Wild West, they should give Bitcoin a spin. However, if Bitcoin does not seem attractive, have no fear, the current payment options are not disappearing any time soon.
Tags:
Planet Drupal
bitcoin

I've been accepting bitcoin on my site for over a year now ( https://shiresilver.com ). Of course its UberCart and not Commerce (yet). I started by using the Paysius service and switched to BitPay, both of whom had modules available. Using their modules you don't need to run a bitcoin daemon on your server so your security and maintenance needs are reduced. And BitPay will automatically convert your customer payments to dollars in your bank account so you don't even need to worry about price volatility.

Having [Drupal Commerce] training gives us the confidence to handle more complex online business projects. We highly recommend this training to anyone who has or will be soon working with Drupal commerce projects.
- Pedro Lozano, Developer at Bluespark Labs
Request a
Quote
Download
Drupal Commerce
Drupal Commerce
Live Sites 62,929
Downloads 2,230,156